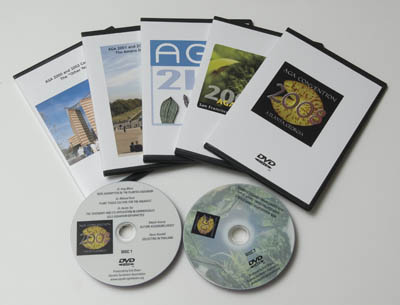 Convention videos are only available to AGA Members, so join already!

NEW! The 2019 convention can now be purchased as online streaming for $15, or on physical media (see sidebar).

Each year’s convention comes in a slimline DVD or Blu-Ray case with a printed cover. All presentations feature the speakers miked directly into the camera, and the original images or video clips digitally inserted into the video (no shoot the screen garbage here!). Various pauses for accidental backwards slides and such have been removed. In the case of Mr. Amano's work, we've overlayed Tomoko Schum's amazing translation directly over his talking. Live demonstrations are 3-camera edits. Starting in 2008, all disks are presented in anamorphic widescreen and are also available on High-Definition Blu-Ray (really helpful for those slides with a ton of tiny words on them!).

Membership note: Due to an arrangement with our speakers, convention videos (both disks and streaming) are only available to AGA Members. If you are not a member, you must join before purchasing a convention disk.

2019's attendance-breaking convention in Seattle has Christel Kasselman's return to the AGA after 16 years, our featured aquascaper Dennis Wong (and his four-hour rock-heavy construction reduced to an hour, with constant Q&A throughout), Vin Kutty's Mad Science growth experiments with Rotala and other plants, Cara Wade on Paludariums, and Cory McElroy on his experiences with 'the industry' side of the hobby. Also included are the vendor micro-talks, the expert Wabi Kusa instruction from Bailin Shaw, workshop highlights, and a hobby discussion panel.

2017 includes Luca Galarraga's epic aquascaping demo edited down to an hour, presentations by Rachel O’Leary (inverts and nano-stocking), Bart Laurens (Dutch Aquascaping -- the full 2-hour presentation at GSAS, and the 1-hour version at the convention), Karen Randall (Sunken Gardens, and the banquet talk on how our plants go from discovery in the wild to our tanks), Ghazanfar Ghori (Bucephalandra), and Luca Galarraga (aquascaping competition). Also included are the micro-talks, the Wabi-Kusa demo and workshop, and nano aquascaping workshop highlights.

2015 features presentations from Rachel O’Leary (inhabitants for the planted aquarium), Tom Barr (two talks), Sean Murphy (basic plant botany and taxonomy), Phil Edwards (substrate), George Farmer (aquascaping), and Nick Klase (yes, including both parts of his talk). Most of the mini-talks are also included. The aquascaping duel will be edited to an enjoyable 40 minutes, and there is a highlights video of the nano workshop. 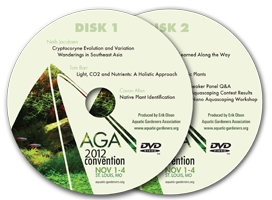 2012 Convention (2-DVD or Blu-Ray): Two talks from the World's foremost Cryptocoryne expert Niels Jacobsen, one technical on the Evolution and Variation of the genus; and one travelogue on Niels’ experiences in Southeast Asia. Two talks from Kris Weinhold, one for beginners, one for more advanced aquatic plant keepers. Brandon McLane from Florida Aquatic Nurseries surveys the methods of Propagating Aquatic Plants. Tom Barr embraces the balance of CO2, light and nutrients. Cavan Allen goes exploring for North American Native Aquatic Plants. There's also a 7-minute edit of the Nano Aquascaping Workshop, a panel Q&A, and the presentation of the Aquascaping Contest awards. All talks are 2-camera edits, and in some cases the slides have been cleaned up better than when they were presented live at the convention!

The 2010 Convention (2-DVD or Blu-Ray): Claus Christensen asks the question Are your growing conditions ideal? And do you care?, gives us some hints on shipping plants and acclimating tissue culture samples, and takes us on a tour halfway around the world. Dr. Mike Kane gives a lecture on amphibious plants, and a tissue culture workshop. Watch the AGA's best stick sterile samples into little jars! Karen Randall presents on aquascape design principles. Ghazanfar Ghori teaches how to grow emerse Crypts, and Jason Balian talks about aquascape photography. We've also got a 3-camera edit of the Iron Aquascaper competition (sponsored by ADG), and a 9-minute highlight reel from our tour of Florida Aquatic Nurseries.

Our 2008 convention (2-DVD or Blu-Ray): On disk 1 you'll get all the lectures (Dr. Morin on Iron Uptake, Dr. Kane on tissue culture, Dr. Tan on mosses, Dr. Amano and Dr. Senske on aquascaping, and Dr. Randall on collecting in Thailand). On disk two are the two live events: the Iron Aquascaper, the Amano aquascaping demo, both 3-camera edits. We've also tucked in the Aquascaping Contest awards -- in total, over nine hours of stuff to watch!

The 2004 Convention includes Jan Bastmeijer (Crypts in Nature, and Emersed Culture), Takashi Amano, Diana Walstad, and Mike Senske. The disk also includes Mr. Amano's late-night aquascape demo, edited down from two hours of three cameras to a blazingly-quick 45 minutes. And we barely crammed in the aquascaping awards. The other two workshops had very poor sound, and are included only as low-bandwidth computer-playable AVI's.

The 2003 Convention (2-DVD set): On disk 1 you get the main talks (Christel Kasselmann, Shaun Winterton, Roger Miller, George and Karla Booth, and Karen Randall), and on disk 2 another five hours of focus groups, banquet and miscellaneous talks, plus a bonus behind the scenes featurette that we challenge you to actually find!

The 2000 Convention features talks by Neil Frank, Paul Krombholz, David Lass (lighting), Charlene Nash on Public Aquarium Planted Displays, and Karen Randall (plus the entire AGA membership in attendence) on Plant Nutrition. We crammed a few convention photos and program notes into the DVD-ROM portion of the disk, and there's another little featurette hidden somewhere as well. Note: the production values on this disk are significantly lower than the others, because in 2000 everyone was still using 35mm slides, and this was our first convention.

If purchasing by mail, make checks payable to AGA and send to: